You are here: Home » Community » Hamtramck Music Festival Continues Every Year Thanks to Sponsors Like Sterling Oil
Previous Next

HAMTRAMCK, Mich. – Sterling Services, LTD., continues to support the Hamtramck community as one of nine sponsors for the three-day long Hamtramck Music Festival, that began on Thursday, March 7, 2019 in Hamtramck, Mich.

“Music and community are two things that I personally enjoy and can get behind,” said Jason Eddleston, Vice President of Operations at Sterling Oil. “When I was approached by John and Andrew, I knew this was an event I would be happy to be involved with. The volunteers that make this event possible, the bars that open up their stages, and the community that embraces the festival give Hamtramck the local spotlight on the first weekend of March.”

The festival started in 2014 after the Hamtramck Blowout vacated the opening week of March, moving to late April. Co-organizer Eugene Strobe told the Detroit Free Press in 2015, “It’d gotten to be like a holiday. And, in 2013, around March, without it, it felt like not having Christmas around Christmas time or missing out on Halloween.

“To not have a local music festival of that magnitude at the beginning of March, on that weekend, that loss, you really feel it. So, we felt, if you build it, they will come. We decided from the get-go that it would be a music fest by musicians and music fans for musicians and music fans. But, also to promote the city of Hamtramck and its businesses, because a lot of those local businesses get a big boost from events like this happening in their bars. So, this started, in essence, to continue the tradition of having a fest in the city that celebrated the Detroit metropolitan scene. For the traditionalists, they love having it in Hamtramck, because it’s so unique to the city and so vital.

“This year, that early March timing led to a very happy coincidence:  HMF is taking place five days after the Paczki Run and two days after Paczki Day.  The sum of all those events is now known as “Eight Great Days in Hamtramck.”

Sterling Services joins Oloman Café + Gallery, SMART Bus, CJAMGG 1FM, Hamtramck Downtown Development Authority, The Review, 8 Days in Hamtramck, and Detroit City Football Club as title sponsors for the event. The sponsorships are the only way for this festival to continue each year as that pays for all the festivals pre-event bills and as John Bissa, Co-Organizer of the Hamtramck Music Festival said, “It is the grease in our gears.”

“HMF is the world’s largest all-local music festival,” explained Bissa. “This year we will have over 200 bands/performers.  But even with all those bands, two of our key goals each year are to keep wristband prices low and to donate proceeds from the Fest to furthering music education in the metro area.  HMF 2019 wristbands cost only $15.  $15 for over 200 bands!  It’s crazy.  Additionally, we were able to give Hamtramck Public Schools over $10,000 in equipment and supplies for their music and arts programs.  Local sponsors are the key to achieving both of these goals. 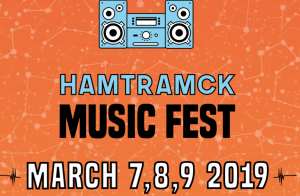 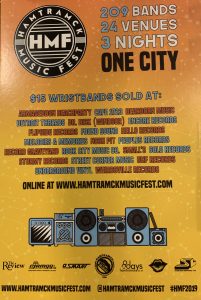